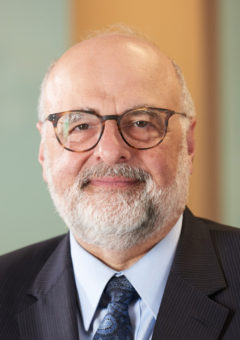 Stephen Krashinsky likes the challenge of a difficult case. Over the past thirty years he has been put to the challenge many times and emerged victorious.

Krash’s grievance arbitration practice takes him all over Southern Ontario, representing public and private sector trade unions in all kinds of collective agreement disputes. In particular, trade unions seek Krash’s assistance when their members must be defended against improper discipline or discharge. It was in one such case that he convinced an arbitrator that an employer should have to establish that it had reasonable basis to conduct surreptitious video surveillance before it could be admitted into evidence to support the decision to fire an employee.

Krash also represents industrial and construction industry trade unions at the Ontario Labour Relations Board in all kinds of applications including certification and displacement, unfair labour practice, jurisdictional dispute, related employer and sale of a business, as well as in construction industry grievance referrals.

The picket line at the 1978 Fleck Manufacturing strike was the memorable site of Krash’s first foray into labour law. As a summer law student for the UAW, Krash served members of the Ontario Provincial Police with notice that the union had laid criminal charges against them for brutalizing the strikers. Around the same time, his determination to fight for the rights of working people manifested itself on the political front, through his activism in the New Democratic Party. He began as the campus leader of the NDP at the University of Toronto, and eventually ran for Parliament as an NDP candidate.

A member of the Canadian Association of Labour Lawyers, Krash has consistently been recognized in the Canadian Legal Lexpert Directory and in Best Lawyers as a leading practitioner in labour law.